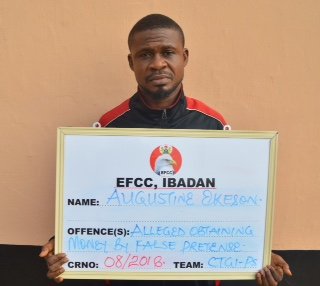 3 Jailed For Impersonation In Ibadan, To Forfeit Assets To FG (Photos)

According to a statement by the EFCC on Friday, the trio – Augustine Ekeson, Obinna Ureahi Ifeanyi and Osho Olalekan Micheal – were convicted in cases filed against them by the Commission.

Justice Patricia Ajoku, after considering the facts of an amended one-count charge against Obinna and Ifeanyi, pronounced them guilty and sentenced them to two years imprisonment each.

The duo had earlier been arraigned on a three-count charge based on the allegations raised against them in a petitioned received from one Mobolade Dele Akinbuluma, a Doctoral student of the University of Ibadan.

Akinbuluma alleged that the accused hacked into her email account to misrepresent themselves as staff of a Kenyan university where she was to undertake a study as part of her doctorate programme.

She was, in the process, defrauded of N875,490 (Eight hundred and seventy five thousand four hundred and ninety Naira).

The duo pleaded not-guilty to the charge, but later approached the EFCC for a plea bargain.

Following an agreement on the terms of the plea bargain, they were re-arraigned on Thursday on a one-count amended charge.

The latest charge reads: “That you Augustine Ekeson M and Obinna Ureahl Ifeanyi on or about the 3rd of December 2015 at Ibadan within the jurisdiction of this honourable court did conspire amongst yourself to commit felony to wit: fraudulently impersonated one Mrs. Lillian Igweta, a secretary to Professor Torto with intent to gain advantage for yourself and thereby committed an offence contrary to Section 27 (1) (b) of the Cybercrimes (Prohibition, Prevention etc) Act, 2015 and punishable under Section 22(4) of the same Act.”

They pleaded guilty to the charge, prompting a prayer by the EFCC counsel, Ifeanyi Agwu, for their conviction.

The presiding judge accordingly sentenced them to two years imprisonment each.

Osho was found guilty of falsely representing himself to be an American citizen named Jack, using same to defraud one Maria.

He was sentenced to six months in prison and ordered to make restitution of $200 (two hundred United States Dollars) to his victim. The jail term takes effect from April 3, 2019, day he was arrested. 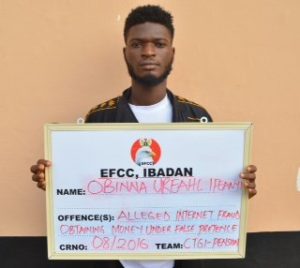 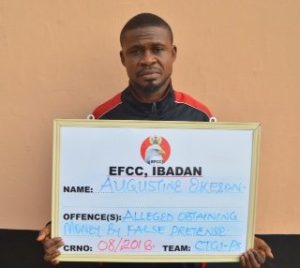