GOOD or BAD!! A Secondary School Girl Told To Destroy Her Phone And Her Colleague’s Phone With Stone (See Video)

This Incidence took  place at Federal Girls College Akure and has been circulating and has got people asking if it’s fair or a pure act of wickedness.

According to report the guilty students had been suspended from hostels and punished initially. 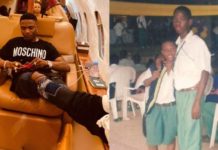 Gbos Gbas!! Wizkid Was Expelled From Secondary School For Stealing His Mum’s Gold –…