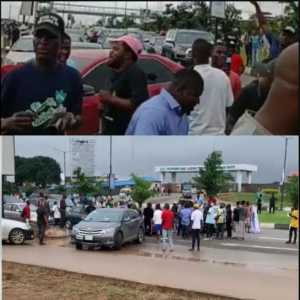 Students protesting the ongoing strike by members of the Academic Staff Union of Universities (ASUU) on Monday, blocked the roads leading to the Murtala Muhammed International Airport in Ikeja, Lagos.

The students under the umbrella of the National Association of Nigerian Students (NANS), South West zone, who were prevented from entering the airport by security personnel, took control of the road, obstructing both inbound and outbound traffic.

Numerous students called on the Nigerian government to agree to the demands of the professors so the strike could end immediately and allow the students to return to class. However, the strike has now lasted for seven months.

On the busy route, the protesting students could be seen singing and dancing while causing traffic jams.

Reports revealed that armed police officers had previously intimidated the students in an apparent attempt to quell the protest.

“We have taken over the road already despite the rainfall, they mobilised lots of security operatives to tame us but nothing shall shake us until our students resume back to class,” NANS Zone D coordinator, Adegboye told SaharaReporters.

The students had last week blocked the Lagos-Ibadan expressway for the same agitation.

Kenyan Singer, Mercy Atis strips nak*d after her bar was raided by police Previous post
“My Relationship With Queen Elizabeth II Was Perfect” – Obasanjo Next post