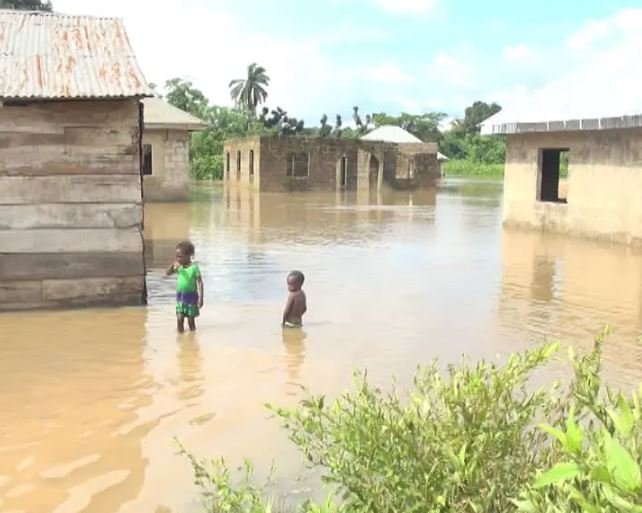 An early morning downpour on Monday in Koton-Karfe, Kogi Local Government Area of Kogi State has led to the escape of about 200 prisoners from the medium federal correctional centre.

Some parts of the building housing the inmates had collapsed, even as many houses were submerged by the flood.

However, a prison source told our Correspondent that 100 of the inmates have been rearrested, while unspecified number voluntarily returned.

Our Correspondent reliably gathered that the rain started around 2 am and lasted till early morning, leading to massive flood that destroyed many houses, including parts of the correctional centre, leading to the escape of the inmates.

The acting Chief Immam of Koton-Karfi central mosque, Saidu Suleiman, Nuhu told our Correspondent that the rains led to River Osugu overflooding its embankment and destroyed many houses, including a part of the correctional centre.

Efforts to speak with correctional officers proved abortive as they refused to speak on the situation.

Sources close to the prison service however disclosed that about 100 of the inmates who escaped have been rearrested by the security agents.

Our Correspondent who visited the correctional director general’s office did not meet anyone in the office.

Meanwhile, the News Agency of Nigeria reported that the Comptroller-General of the Nigeria Correctional Service, Mr. Jafar Ahmed, confirmed the story while speaking with newsmen in Koton Kafe on Monday.

The CG said the flood came at about 3a.m., submerging the perimeter fence and the walls of two cells.

He said there were 228 inmates at the centre as at the time of the incident.

Ahmed said that the prison was not habitable at present, saying that the re-arrested inmates were being transferred to other prison facilities in the state.

He said that details of the incident will be made public later.

Also speaking, the Security Adviser to the state governor, retired Commodore Jerry Omadara, confirmed that over 100 of the inmates have been re-arrested.

According to him, some of the inmates returned of their own volition, some reported themselves at nearby Police stations, while a combined team of policemen, soldiers, naval officers and civil defence corps rearrested others.

Omodara said the state government was informed of the incident at about 4a.m., adding that Governor Yahaya Bello immediately directed head of security agencies in the state to deploy their personnel to the scene.

He said that 228 inmates escaped, noting that many of them escaped for the safety of their lives.

He said that security agents were still combing the bush to re-arrest some of the fleeing inmates, lamenting that the flood was not making it easy for the prisoners to escape.

He commended the security agencies for their prompt intervention, saying that nobody died in the incident.