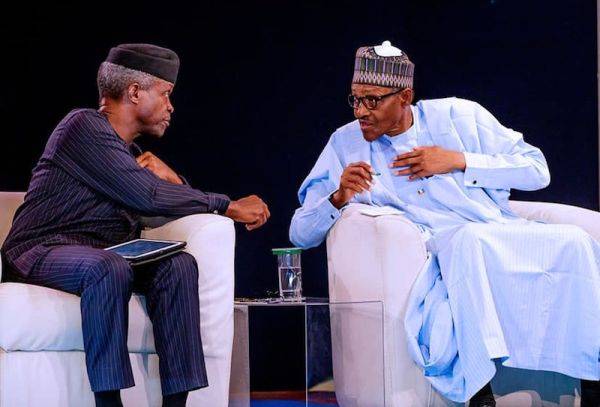 Buhari Will Make A Good Entertainer After Retirement – Osinbajo

Vice President Yemi Osinbajo has stated that the President, Muhammadu Buhari, will make a good entertainer after his regime.

Buhari Will Make A Good Entertainer After Retirement – Osinbajo

Osinbajo stated this on Friday, while proposing a toast for Buhari, at a private dinner organised by his family and close associates to mark his 80th birthday at the State House Banquet Hall.

Citing the President’s “sense of humour,” he recalled how the President used jokes to calm him down, thereby causing him to retract his intention to submit a letter to the Economic and Financial Crimes Commission, to investigate allegations of corruption levelled against him.

“Mr. President is a very humorous man and I think he would make a very good career in entertainment one way or the other when he retires. One day, I went to him because they were some allegations that were made against me. And I was so angry, so I went to him to show him the letter I had written to the EFCC to investigate.

“He looked at it and looked at me and because he calls me VP or Professor depending on his mood. This time he said, ‘VP, why do you worry yourself about all these people? These people just make all sorts of allegations, they make all sorts of stories up, even they are saying that I am about to get married again. And even some foolish people were waiting at the National Mosque, waiting for me to come and marry again,” he said.

Osinbajo commended Buhari for leading the nation with “great courage and commitment,” saying “I invite your excellences, ladies and gentlemen, to join me in proposing this toast to an exemplary leader, a forthright and honest man, a good and kind man, and a man who has led this country with great courage, determination and commitment for so many years.

“We pray that the almighty God will preserve his life for very many years to come and that he will live all of these many years in good health, peace, joy and with the love of all of our country men.”

Meanwhile, Buhari said he will not miss the Aso Rock Villa much due to constant harassment from some Nigerians who have belittled his efforts to make the country better.

He also said despite so much efforts on his part, his best do not seem to be enough.

In a documentary played at the dinner, Buhari said, “I wonder if I am going to miss much. I think I’m being harassed. I believe I’m trying my best but still my best is not good enough. Because there are people around that think that they can intimidate me to get what they want instead of going through certain systems to earn whatever they want to earn. And they are some people who want to be clever.”

At the event were governors of Kebbi, Atiku Bagudu; Katsina, Aminu Masari; former Ekiti state Governor, Kayode Fayemi; Secretary to the Government of the Federation, Boss Mustapha, the President’s Chief of Staff, Ibrahim Gambari; cabinet members, family members, captains of industry including Chairman of AriseTV and the Thisday Group, Nduka Obaigbena, amongst others.