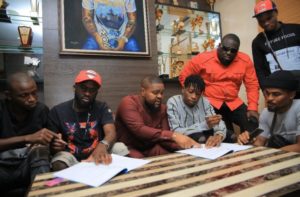 David Adeleke better known as Davido has expanded his record label again as he adds a new artiste to the DMW/30BG crew.

On Twitter, Davido announced the official sign on of indigenous music star Lil Frosh to his label. The deal is in partnership with DMW & 30BG affiliate AMW.

Lil Frosh was apparently discovered by Aloma a member of the 30BG crew and since partnered with Davido to bring the indigenous rapper on board. The new artiste is best known for his single titled ‘Davido’ released some months ago.