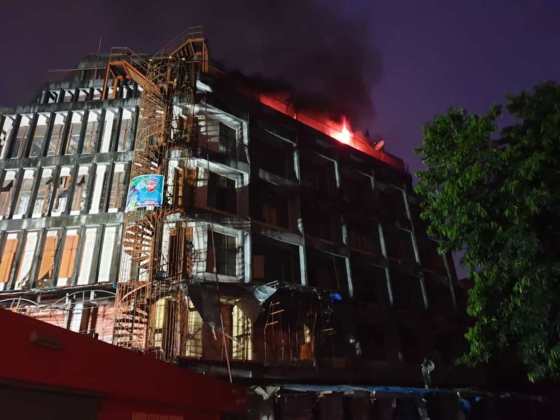 The policeman was said to have lost his life when a section of the building collapsed on him late Tuesday evening, as firefighters continued with their efforts to put out the raging fire. The death of the policeman was announced late evening, through the twitter handle of Rapid Response Squad, RRS, @rrslagos767. The tweet reads: “We are still at the scene of the fire incident. Though it has reduced to a reasonable extent, Efforts are still on to put it out completely. Partial building collapse occurred during the process which claimed the life a policeman from a nearby division.” It was also gathered that another unidentified victim had earlier been killed in the explosion that triggered the fire earlier in the morning. The death could not be confirmed at press time.
Meanwhile, the Director General of Lagos State Emergency Management Agency, LASEMA, Dr Femi Oke-Osantyintolu, confirmed that a simultaneous fire incident was also reported at a building in the nearby Dosunmu market, but had already been put out by firefighters. “At the time of this report, an additional fire truck had arrived at the scene of the Balogun market fire to complement the efforts of the men battling the fire. “Fire has also broken out on the other building on the right to the first building at 6 am. LASEMA heavy-duty equipment excavator and low-bed deployed to the fire point at 6.13 am Wednesday. “Lagos State Fire Service has assessed the fire but can’t risk going up for safety purposes. “Union Bank Fire service has been contacted for back up to assist with their skylift fire truck. Recovery operation still ongoing as at 8am.”
Speaking on the fire outbreak, Director General, Lagos State Safety Commission, Mr Lanre Omolaja, blamed the incident on lack of safety measure on the part of the traders. According to him, “The fire started about 11 am from one of the floors of the building and spread to other floors due to the compact nature of materials stored. “The fire servicemen and other rescue team have been battling to keep the fire at bay from spreading to other adjoining buildings and floors.
“From our preliminary investigation, we gathered that the fire was as a result of a power generating set which burst into flames and spread fast to other floors. “The high magnitude of the fire was solely due to the fact that the materials are highly combustible, such as textiles, mannequins cables, among others.
“However, we will still conduct detailed investigation to ascertain the immediate and remote cause of the fire. We have a team of experts on fire accidents who will do comprehensive analysis into the outbreak. “We are also embarking on a massive enlightenment and sensitization on safety in our markets, particularly at this period of Yuletide on the need to be safety conscious. We can’t afford to keep losing properties in this manner in the state. Governor Babajide Sanwo-Olu is committed to the safety of lives and properties of everyone in the state.”