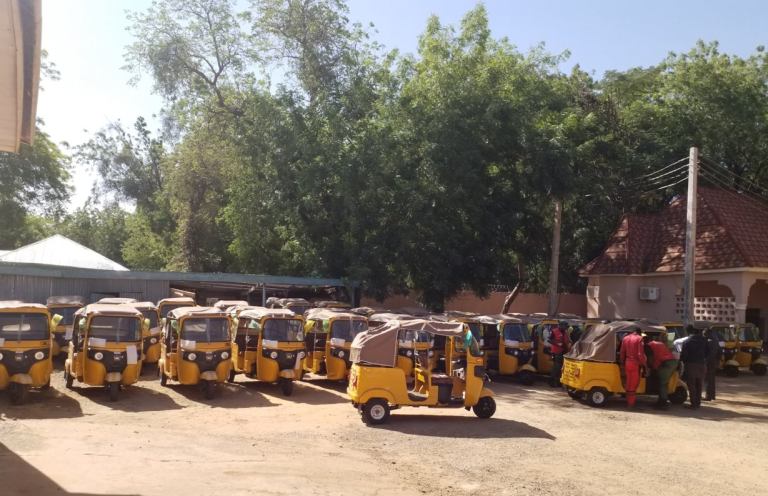 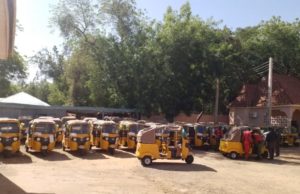 The Sokoto Zonal office of the Economic and Financial Crimes Commission, EFCC, on Monday, handed over Fifty Three (53) Tricycles (Keke Napep) recovered from a contractor to the Zamfara State government.
The recovery of the Tricycles was sequel to investigation on a contract that was initially awarded to Kynco and Wadatau at a total cost of N1.2 billion for the supply of 1000 Tricycles. Investigation revealed that only 947 units were supplied before the expiration of the tenure of the immediate past administration in Zamfara state. Sokoto Zonal Head of the EFCC, Abdullahi Lawal, while handing over the tricycles, described the development was as a milestone in the fight against corruption. According to him, the Commission “is currently investigating over 60 cases from Zamfara state in relation to the past administration. These include cases against individuals, public and private organizations as well as government Ministries, Departments and Agencies (MDAs). The total sum involved is over 200 billion Naira. Several bank accounts connected to fraudulent activities have been frozen by the Commission”.
He noted that the fear of EFCC’s investigation has compelled several contractors, who collected billions of naira from Zamfara state but failed to deliver, to return to site. In his response, the Secretary to the Zamfara State Government who received the 53 recovered Tricycles on behalf of Zamfara state government, Alhaji Bala Bello Maru commended the Commission for its achievements so far in the zone. He assured the Commission of the state government’s readiness to give necessary support to it at all times. “We will provide the list of those going to benefit from these Tricycles and as well invite EFCC to come and witness the distribution”, he said.
Share
Buhari to sign 2020 Budget Tuesday Previous post
Man City won’t stand in way of Arteta joining Arsenal Next post