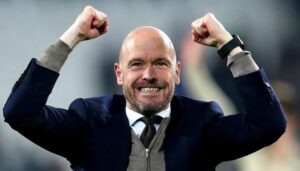 This makes him the highest paid Dutch coach in Premier League history.

The 52-year-old was on Thursday confirmed as the new manager at Old Trafford and is set to take charge in the summer.

He will take over from interim boss, Ralf Rangnick in the summer, by then, the German’s six-month contract would have expired.

The first in recent history was Louis van Gaal, who was appointed in May 2014.

And his compatriot is set to earn more, with De Telegraaf reporting that his yearly intake will exceed £3.3million.