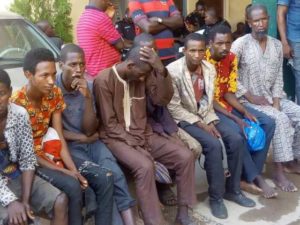 The members of the 26 kidnapping gang members made up of Fulani/Hausa Joint Counter Kidnapping operation conducted by the FCT Police Command in synergy with the Nigerian Army, and other security agencies have successfully smashed the notorious kidnapping gang terrorizing Kuje, Rubochi, Kwali and Abaji axis in Abuja whose victims included NSCDC personnel, a Police Inspector and several other victims. Consequently, twenty-six (26) kidnap gang members made up of Fulani/Hausa speaking criminals led by one Usman Abdullahi, some as old as 50 years and others as young as 25 years, were on Wednesday paraded by the FCT Police Commissioner, CP Bala Ciroma.
At several times, the kidnap gang collected ransoms ranging from #6million, #8million and #13million from the family of kidnap victims while some of the victims lost their lives in the hands of the kidnappers.
Giving details of their arrest, CP Ciroma said “The Joint operation tagged ‘Operation Sharan Daji’ arrested the suspects in several dens along Kuje, Kwali, Abaji road. He said 4 locally fabricated firearms, one Dane gun with 10 rounds cylinder loader, 4 cartridges, 3 cutlasses, 3 face masks and 24 wraps of Indian hemp and charms were recovered from the kidnap suspects. Police operatives also arrested a member of another kidnap gang named Juri Abubakar whose gang had been terrorizing residents of Yangoji, while he was on his way to supply food to the kidnap gang in their hideout.
His arrest followed a tip-off that a victim kidnapped by the gang was in a den and the gang members were expecting payment of ransom. Before the Police team got to the den of the kidnappers, they escaped thereby scuttling the ransom payment. Concerted efforts are being made to arrest other gang members named as Ibrahim Usman, Dahiru, Jayah, Saidu and Awalu, all-male members of the syndicate. Similarly, Police Operatives attached to Abaji division, arrested another 5-man kidnap gang including a student of the University of Abuja who said the money they make from kidnapping was used for ‘flexing and attending night clubs’. The suspects are Zaharadeen Abubakar 23 years, Hamza Garba 25 years, Usman Ibrahim 25 years, Jubril Yusuf 24 years and Ismail Omadivi 20 years student. They were nabbed when the victim they attempted to kidnap and demanded the sum of #500,000 from, informed the police and was asked to play along by the police.