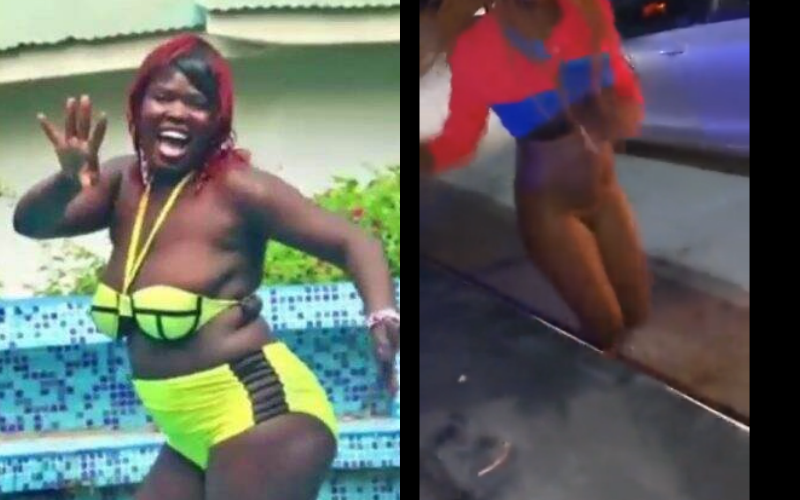 Kenyan Singer, Mercy Atis strips nak*d after her bar was raided by police

After authorities raided her brothel on September 18, singer Merceline Atieno, aka Mercy Atis, who rose to fame after her song “I Don’t Give a Damn” went popular on social media in 2020, emerged naked.

Kenyan Singer, Mercy Atis strips nak*d after her bar was raided by police

Following a public alert, Kenyan police officers and the Kajiado County Liquor Licensing Board conducted a raid on the brothel, which was originally a restaurant.

After being told she was operating an illegal facility, Atis insulted the police officers, stripped naked and dared them to kill her.

The facility was shut down and Mercy Atis was subsequently arrested. She is currently being held at Kitengela police station.

Chairman of the Liquor Licensing Board Jonah Marapash who ordered the immediate closure of the bar, said;

Here are videos of Mercy Atis when she stripped naked below;

This is Mercy Atis @mercymusikKE, a lady who caused a stir last year after she was allegedly harassed by Kitengela OCS for operating a night club without a license. On this video, she was protesting after police bungled on her operating a brothel at the same club…. pic.twitter.com/YEKLfNf8ZU

after residents complained to the @NPSC_KE. Police arrived but were not able to arrest her after she striped. The girls too took off. Today it will be business as usual. @DCI_Kenya pic.twitter.com/4ZIAL8NdNr