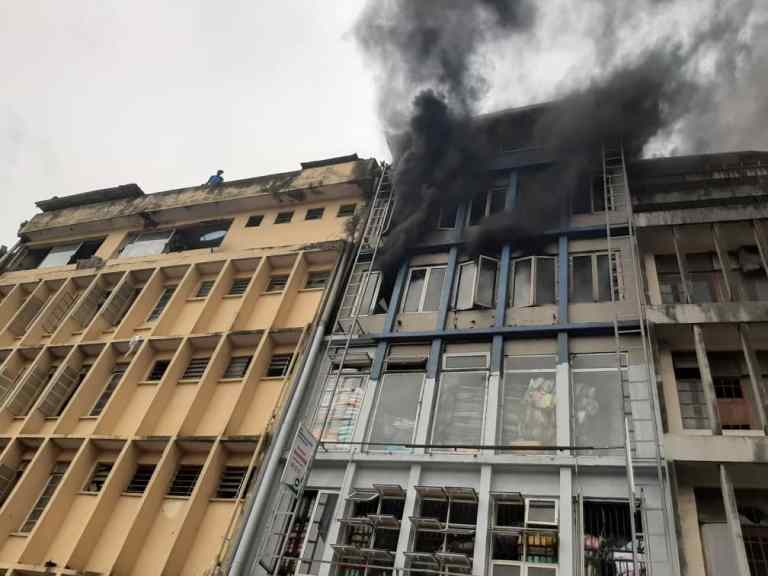 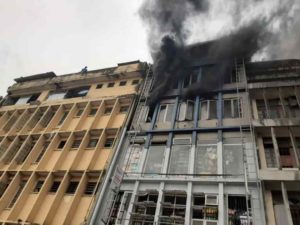 The Special Adviser to Lagos State Governor on Central Business District (CBD), Prince Olanrewaju Elegushi, has said that two buildings preceding No 43 Martins street, gutted by fire had been isolated to avoid disaster.
Elegushi made this known in an interview with the News Agency of Nigeria (NAN) in Lagos on Wednesday. According to him, the integrity of the building is very questionable because one side of the buildings at 45 and 41 Martins street have cracked and falling by itself as a result of the fire outbreak.
“Between 10: 30 a.m of Tuesday and 6:00 p.m of Wednesday the fire was yet to be put out, despite all efforts made by the Lagos State Emergency Management Agency (LASEMA) led by its Director-General, Dr Olufemi Oke-Osanyintolu. “I must commend the efforts of all the Lagos State Emergency agencies, Lagos State Safety Commission, Federal Fire Service and other stakeholders such as United Bank of Africa (UBA) fire service, Union Bank, Nigerian Ports Authority (NPA) and Julius Berger fire service for helping in preventing the fire from extending to other building in the area. “The Lagos State Building Control Agency (LASBCA), will carry out an integrity test of the two buildings preceding No 43 Martins street and if they fail the integrity test, then they will be demolished. “Gov. Babajide Sanwo-Olu’s administration was very passionate about the safety of Lagos citizens, and we will not allow the building to collapse before providing the necessary solution. He said that Gov. Sanwo-Olu came at the early hour on Wednesday to the scene and sympathised with the traders, who lost their goods in the fire outbreak. Elegushi said that Sanwo-Olu had promised to assist the affected traders, who were with collateral damages, adding that the damages would be measured after putting out the fire. “The operation is still ongoing, all the emergency response officers have been working since Tuesday with other stakeholders, and as we speak operation is still ongoing to put out the fire completely. “After a long hour of burning, the debris fell on a police officer, Sgt. Michael Dominic and he died after getting to the hospital,” Elegushi said. He said that the main course of the fire was not yet ascertained, adding that they were just getting different information that the fire was caused by generator explosion, while some said it was as a result of electrical fault. The Acting Director, Lagos State Fire Service, Mrs Margret Adeseye, said that the service had enough chemical and fire engine to fight the fire. She explained that it was difficult to put out the fire due to the industrial generator and diesel tank erected on top of the building. Adeseye said that the officers were on top of the situation and that in a few minutes from now the fire would be put out Reports have it that LASEMA was evacuating the debris with Doosan Excavator to enable fire servicemen to penetrate the whole buildings and quench the fire