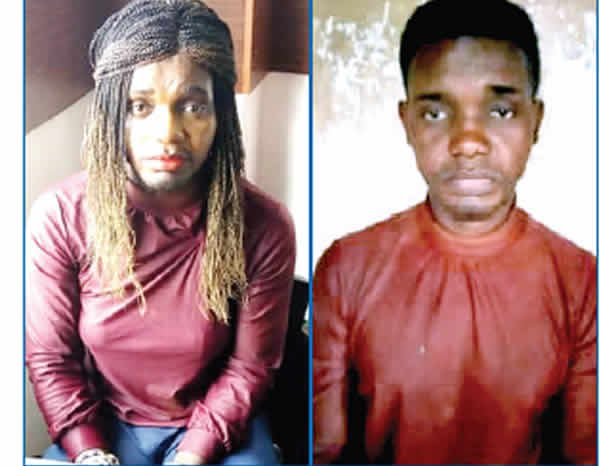 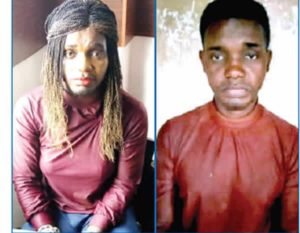 Luck has run out on a 29-year-old man, Victor Monday, one year after he started disguising as a prostitute to defraud men.

Monday was arrested by a police team from the Mushin Police Station around 12am on Ogunmokun Street while he was in female costume waiting for “a client” by the roadside.

He was initially apprehended for staying late outside without giving any genuine reason.

City Round learnt that it was not immediately known to the policemen that Monday, who adopted the name Joy to perpetrate the crime, is not a female.

He wore a wig, makeup and put on padded breasts. He was said to have been kept in the female cell until much later in the morning when a policeman on an inspection around the cell spotted him.

A police source told our correspondent that Monday blamed the act on joblessness, adding that the suspect targeted men in nightclubs within the state.

“His mode of operation was to go to clubs at night and look for men he would spend the night with while disguising like a woman. He would dance around to attract men to himself. Whoever is interested in spending the night with him would approach him.

“He would collect some money from his unsuspecting victim as part payment for his service and have fun on his bill. While they were drinking and wining, he would tell the man that he wanted to urinate and use that opportunity to run away. He said he made between N7,000 and N10,000 per night,” the source said.

In his statement, the suspect, who hails from Rivers State, said he was a stylist before he went into the crime in 2018. He said he was once arrested by the police for the same offence but his church members assisted in securing his bail.

He said, “I came to Lagos last year and was squatting around. When it was night, I would look for a hidden place to dress like a woman and go to any club to dance as a woman. Men who have feelings for me would give me money, but I don’t follow them to hotels. I managed to run away.

“At times, I made N8,000 per day. I was going to a nightclub on September 15 when police arrested me. I told them my name is Joy, but later one of them discovered that I am a man. I do this because I don’t have a job.”

A police prosecutor, Inspector Koti Aondohemba, consequently brought the suspect before an Ogba Magistrates’ Court on four counts bordering on impersonation and fraud.

The charges read in part, “That you, Victor Monday, on September 15, 2019, at 12.10am, on Ogunmokun Street, Akala area, Mushin, in the Lagos Magisterial District, did indecently act by presenting yourself as a woman in order to obtain money from members of the public, thereby committing an offence punishable under Section 380 of the Criminal Law of Lagos State of Nigeria, 2015.”

The defendant, however, pleaded not guilty to the charges.

The presiding magistrate, Mrs M. O. Tanimola, granted him bail in the sum of N80, 000 with one surety in the like sum. The case was adjourned till October 16, 2019 for mention.