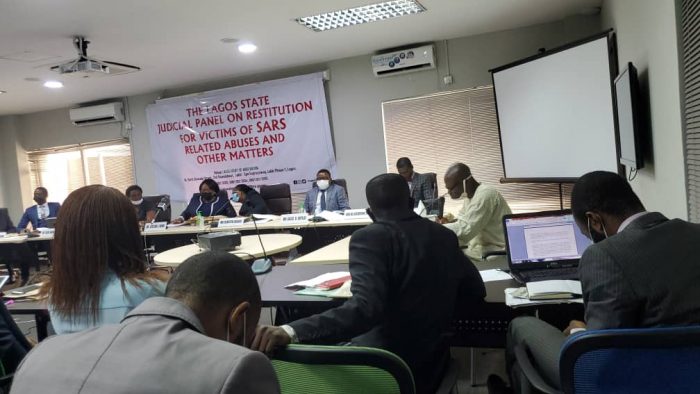 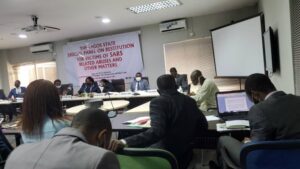 A retired police officer has asked for compensation of N500 million from the Lagos Judicial Panel over the death of his son in the hands of officers of the Nigerian Police Force.

Julius Adeogun, 68, approached the Judicial Panel of Inquiry on Tuesday to narrate the ordeal his family has gone through and how the police force turned him down following the death of his son.

The petitioner, who came to the panel with his daughter-in-law and the four children his deceased son left behind, said he retired on April 1, 1998, as a police sergeant. Before his retirement, he worked as a court orderly, Black Maria escort, and worked in the surveillance team.

Narrating his ordeal, Mr Adeogun said his son, Adebukola Adeogun, died on February 1, 2018, after he was arrested by the police.

“On February 1 2018 at about 1 a.m., I was sleeping while I received a call that my son was among those raided by the Okoko police station along Oke Alfa Street, Okokomaiko, at about 9: 30 p.m. of the previous day.

The retired police officer said on hearing this, he made attempt to go to the police station in the middle of the night but had no means of transportation.

He said the next day before he got to the police station, his daughter-in-law called that his son was at home, but brought in dead.

“When I got to his house around 12 p.m., I found him lying on the floor, dead. I requested the circumstances surrounding his death from his wife and she told me it was the police that got him arrested.

“I thereafter proceeded to the police station, I got to the counter I met with the CRO (Crime Reporting Officer) and I explained how I met my dead son in his house. He incidented the case and referred me to one Sesan at Okoko police station,” the retired officer said.

While giving evidence before the panel on an earlier date, Adewumi Adeogun, the wife of the deceased, told the panel that she rushed to the police station in the morning of February 1, 2018, after his arrest, where she found her husband lying on the floor at the police station.

“When I got to the police station, I met my husband on the floor, foaming in the mouth. I grabbed a police officer that what did you do to my husband, how come he started bringing out foam from his mouth. The officer flung my hand off him,” she narrated to the panel.

She said her husband gave up the ghost and was taken home before his father arrived.

The distressed father said he immediately reported the incident at Okoko police station where he met with the Divisional Police Officer, Aliu, chief superintendent of police.

“I wrote a statement and the DPO followed me to the scene (the home of the deceased) where he was still lying on the floor. By the time we got home, many youths have gathered, protesting and saying they want to take his body to the police station.

“I begged the boys and stopped them because I know that if they attack any officer or burn down the station, it will bounce back on me,” he told the panel.

Mr Adeogun said the DPO gave an order that the body of the deceased be taken to Badagry morgue and was thereafter taken to the Lagos State University Teaching Hospital (LASUTH) for autopsy.

The retired officer said the autopsy report revealed that his son died from “blunt force trauma”, although he had other underlying health conditions.

Being a retired police officer, Mr Adeogun said he petitioned the Commissioner of Police on the matter and his case was transferred to the Human Rights office.