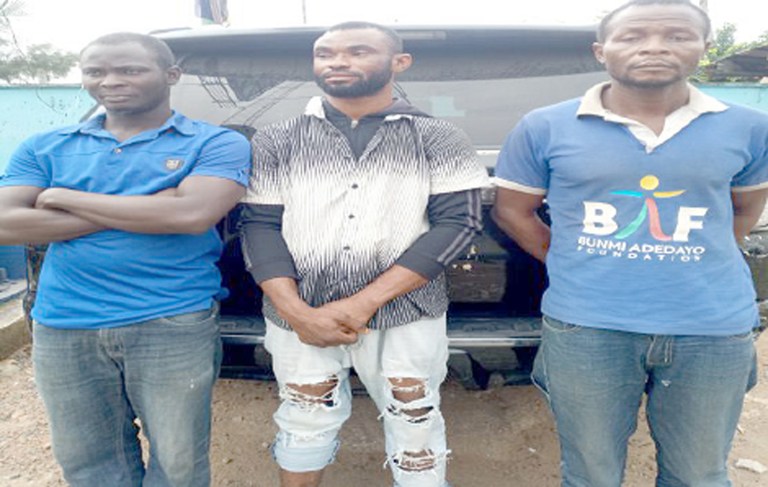 A gardener and two cab operators are presently cooling their heels in police custody for allegedly invading a building in Lekki Phase 1, Lagos, posing as detectives from the State Criminal Investigation and Intelligence Department.

The suspects reportedly took their time by engaging their victim in a conversation while the operation lasted. At the end , they carted away two vehicles: a Hyundai jeep and a Toyota Forerunner, electronics, cash and other valuables.

The daring suspects: Christopher Daniel, 29; Mercy Nwodo, 30 and Patrick John, 47, have been driving the Forerunner jeep, around Lekki phase 1, same area the victim lives until they were arrested as they were about to sell the Hyundai jeep valued at N10 million, for N2 million, at Awoyaya, Ibeju Lekki area of the state. Meanwhile, owner of the stolen vehicles, Jimoh, who was apparently scared to report the incident to the Police, owing to threat to his life by the suspects if he did so,was surprised to find a team of policemen from the Anti Cultism Unit, at his gate Tuesday, with one of the suspects who invaded his home, handcuffed. An elated Jimoh, who said that such scenario could only be witnessed in a movie, narrated his ordeal in the hands of the suspects. Invasion He recalled how he was alerted by strange noise from his sitting room, at about 10pm on August 17, 2019. He said, “When I went to find out what was happening, I found two men in my sitting room. This is a house with a security set up. The doors are security doors, you can’t break it. I discovered that they cut the burglary proof from one of the windows to gain access. “I was the only one in the house. My wife and children were not around. They made me stay in the kitchen, while they went round, disrupting so many things. They said they came to take two vehicles from my house. They even listed what they wanted to take. They listed two petrol generators, battery of one of my diesel generators, two vehicles and batteries of used vehicles. “Initially, two of them came in but the third one later joined them. The third one said he was a murderer, that he had murdered people and would kill me if I didn’t cooperate. They forced me to give them keys and documents of two of my cars; Hyundai, 2010 Model and Toyota Forerunner 2019 model. “They took laptops, phones, electronics, cash and briefcase. They also collected all the keys to the rooms and drove out with the two vehicles, threatening that if I talked, they would kill me. I was a bit surprised when I saw some policemen who came knocking at my gate, after the robbery. I thought the thieves had come again and that they could have made arrangement with the police to come and kill me because the first time they came, they said they were from the SCID. But when I opened the gate, I saw one of the three men that came to my house, handcuffed. I was surprised because I did not even talk to the police. They questioned me and told me they arrested them at the point of selling the vehicle. I was surprised and impressed at the same time, about how they were arrested”, he stated. Plan to invade One o f the suspects, Patrick John, a gardener said that the plan to invade the house was hatched at a lotto joint at Lekki. He said that they concluded that the house could have been abandoned because grass had overgrown the entire building. According to the father of one, “As a gardener, I used to go out to pluck flower seeds to sell. In this particular building at Lekki phase 1, where I went to pluck golden palm seeds, I noticed that the building has been overgrown with grass and I thought nobody lives there. “I was discussing the matter openly at a lotto shop in Lekki, and told those present that the building could have been abandoned by a ritualist, having committed so much atrocities. Daniel suggested that we should go and pack the property and sell. He invited his friend, Mercy to join us. We went there around 10pm. I jumped over the fence and cut the small padlock on the gate with pliers and opened the gate for Daniel to come in while Mercy remained outside .

“We went in through the window of the sitting room, having cut the rusty and weak burglary proof. By the time we entered, we heard some noise. Daniel said it was like a ghost was inside because a weird fellow came out and asked how we got inside. Daniel and I attempted to run, thinking it was a ghost but there was no way for us to escape. So, we summoned courage and told the man that we did not come to kill him that we only came to take some things since we discovered the house was abandoned. We asked why he looked unkempt because he seemed not to have taken his bath nor brushed his mouth for long. We asked if he owned the house, he nodded. We also asked if he was eating because he looked so emaciated, he said yes and we asked him to take us to the kitchen, where we found only bottled water and different wines all wrapped in foil papers inside the fridge. “At that point, Daniel asked me to go and call Mercy. When Mercy came in, I stayed outside leaving him and Daniel with the man. While outside, I was scared because the man said we did not know where we came to and I regretted going there”. Hunger took us there At this point, Mercy, an Uber driver, took over. He said, “I told him that hunger brought us to his house, that we thought nobody lived there and that he should give us something. He told us to take whatever we wanted. I told him to give us cars and he gave us the car keys. He released it because of the threat. But we did not beat him. “We drove the two cars away. The cars were with us for one week without disturbance. The person we gave one of them to sell took it to an intending buyer who invited the Police, as he suspected that the car could have been stolen because of the amount we asked him to pay”. The Lagos State Police Public Relations Officer, DSP Elkana Bala, who confirmed the arrest, said investigation was still ongoing, adding that the suspects would be charged to court. 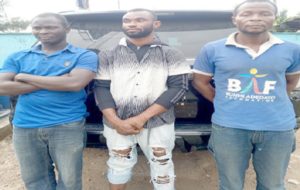