Senate Moves for Poor Nigerians to have access to quality healthcare 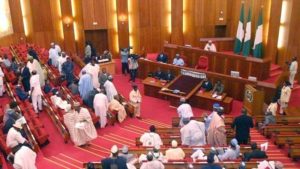 THE Senate has begun the process of regulating Health Insurance in the country to ensure that poor Nigerians have access to quality healthcare. According to the Senate, to achieve this is through the establishment of the National Health Insurance Commission, which it is presently seeking for its establishment.
The Upper Chamber while considering a bill for an Act to repeal the National Health Insurance Scheme Act, 2004, said the passage of the National Health Insurance Commission Bill, 2019 under consideration by the National Assembly would guarantee the effective implementation of the country’s health insurance policy. According to Senator Ibrahim Yahaya Oloriegbe (APC, Kwara Central), the bill “is about every family in Nigeria as it is manifestly clear that it is poised to positively affect all Nigerian families.” He said that the Bill seeks to boost healthcare delivery in Nigeria, provide robust, affordable and sustainable financial mechanisms for health, and reduce the high mortality rate across the country. The Bill Scaled second reading in the Senate yesterday. Oloriegbe further stated that the NHIS Commission bill, when passed into law, will strengthen the implementation of the Basic Health Care Provision Fund provided for in the National Health Act 2014, and enacted by the Seventh National Assembly under the leadership of Senator David Mark. He said, “Nigeria’s healthcare system is in urgent need of reform – the system must refocus to ensure it meets its laudable objectives and global best practices. “It is time to provide the legal framework for a new policy shift in order to help poor and vulnerable Nigerians access to quality healthcare without any financial impediment. “The bill as proposed, if enacted and properly implemented in the form envisaged, will make health insurance compulsory, boost the nation’s health indicators, improve productivity and economic well-being of citizens and enable the attainment of Sustainable Development Goals. In his remarks, President of the Senate, Senator Ahmad Lawan, referred the bill to the Committee on Health for further legislative work. Also yesterday, the Senate urged the private sector not to leave the funding of Nigeria’s health sector to the government alone if the attainment of universal health coverage by 2030 must be realised, just as it called on States in the federation that has not enacted laws on National Health Insurance to do so without further delay. Resolutions of the Senate were a sequel to a motion on “The 2019 International Universal Health Coverage Day”, sponsored by Senator Chukwuka Utazi, PDP, Enugu North. Coming under order 42 and 52 of the Senate Standing Rules, Utazi stressed that the United Nations General Assembly on December 12, 2012, endorsed a resolution urging countries to accelerate progress towards Universal Health Coverage (UHC) with emphasis that everyone should have access to quality and affordable healthcare. He said that the goal of the UHC is to ensure that all people, no matter who they are or where they live, should be able to obtain health services they need without suffering financial hardship when paying for them.