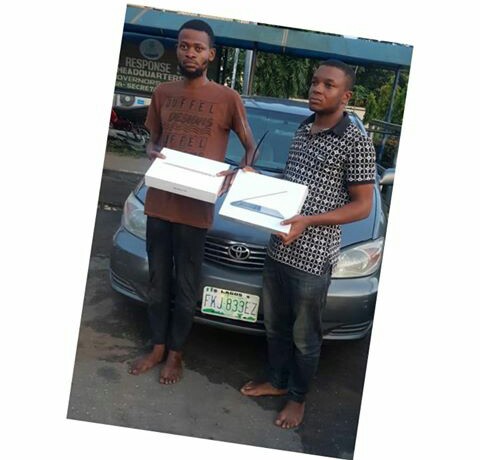 Two suspected robbers who lured a computer dealer to a desolate location and dispossessed him of 3 Apple laptops valued at N1.5 million, at gun point, have been arrested by the operatives of the Lagos Rapid Response Squad.

The suspects, 27-year-old South Africa returnee forex trader, Victor Remi, 27, and Ekeh Maxwell, 23, a musician, disclosed that they got all the details of their victim through his twitter handle.

They added that they opened a conversation with him immediately and placed an order for two Apple laptops (MacBook Pro – 2018 edition).

According to Remi, “I told the dealer I was the Managing Director of a new company in Acme Road, Ikeja. I also told him that my daughter recommended him and that his laptops are legit. .

I ordered one for myself and another for my secretary. It took us a week to initiate, perfect our plan and execute it. My colleague, Maxwell borrowed his brother’s Camry (FKJ 833 EZ) for the deed. .

We bought a toy gun and painted it. I controlled the dealer to Acme Crescent because we knew the location was a desolate area. While Maxwell drove, I whatsapped the dealer that he brings the consignment to my office. .

I told him that my driver would pick him up at Acme Crescent. We met him there. He entered the vehicle while the driver picked me up few meters from where he entered. He was sitting in front with the laptops. .
.
I placed the gun on his neck and ordered him to surrender them. We wanted to take his phone too but he pleaded not to be stripped of everything. We told him to alight from the car and we escaped.”