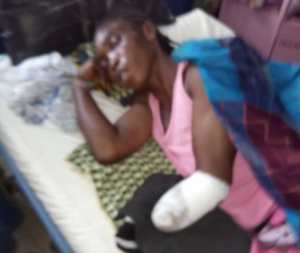 A middle-aged woman Mrs Grace Zeku was at the weekend reportedly attacked by suspected armed herdsmen who chopped off her left arm at Gboogyo village in Guma local government area of Benue state.
The Victim, Mrs Grace Zeku 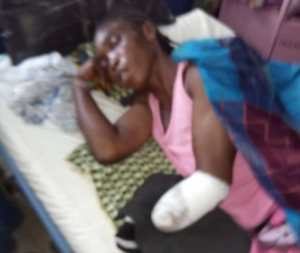 Recounting her ordeal, Mrs Zeku who is currently receiving medical attention at the Federal Medical Centre Apir Makurdi, she had gone to farm that morning when the herdsmen waylaid and attacked her. She said “they came and attacked me with their knives, they asked me to place my hand on a log of wood when I resisted, they forcefully placed my hand on the wood and cut it off. “After cutting off my hand and inflicting machete cuts on my head and seeing that I was in pains and bleeding they took the hand and ran off and asked me to go home.
“Luckily when I managed to get back to the village my family members and neighbours came to my aid and ensured that the bleeding was checked and they brought me to the hospital,” she added. Vanguard gathered that following the incident, Gboogyo village has been deserted as the people who recently returned back home from Internally Displaced Persons, IDPs, camps have fled their homes for fear of being attacked by the armed herdsmen. When contacted, the Police Public Relations Officer, Deputy Superintendent, DSP, Catherine Anene said she was yet to receive details of the incident, “I am waiting for the report from the Divisional Police Officer, DPO, in charge of Guma on the matter,” she added.The victim was said to be in her farm in the community bordering Nasararwa state when her attackers accosted her in the farm and attacked her.
Share
[Music] KS1 Malaika – Celebrate Previous post
President Buhari commiserates with flood disaster victims Next post