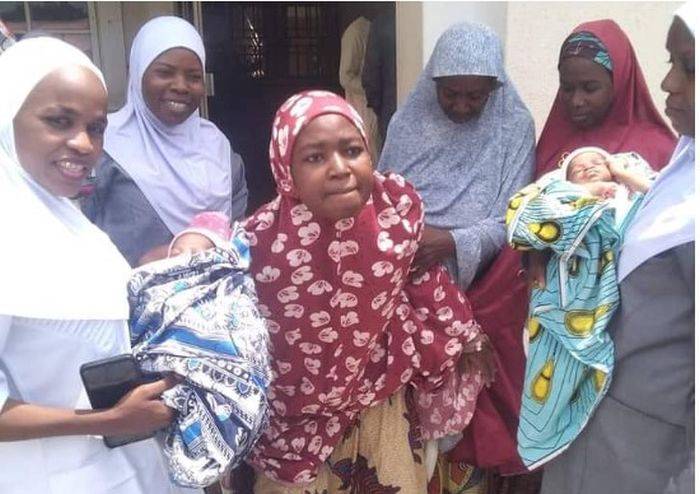 A woman has landed in serious trouble after stealing a baby. It was gathered that the lady was mocked for not having a child which made her to commit the act.

The lady an eight-day-old twin, Ibrahim Mohammed, from the Abubakar Tafawa Balewa University Teaching Hospital, Bauchi. The baby has now been recovered from her by the Department of State Services and reunited with her family.

The suspect who stole the baby was said to have disguised as a Nurse in the hospital to perpetrate her crime without traces.

According to sources, the suspect allegedly stole the baby because of the frustration from the constant mockery by her mate and family members of the husband of her childlessness.

It was gathered that the suspect took the baby home to her village in Dull, Tafawa Balewa Local Government Area of the state saying that she had given birth to the baby. The husband was said to have outrightly rejected the baby and told her to return the child from wherever she took him from.

It was further revealed that having heard about the incident of a missing baby from ATBUTH in the media, her mate raised the alarm and the matter was reported to security agents in the area.

“On getting the lead,” a source said, “security operatives from the DSS visited the area and embarked on a search of house to house where they found the baby and the thief who was immediately arrested. She is currently with the DSS being interrogated.

“In her confession, it was discovered that the suspect has never given birth and said that she stole the baby due to the mockery she receives from her mate and other members of her husband’s family.”

Narrating how the baby was stolen from her, the twins’ mother, Bilkisu Alhassan, said that the culprit came and told her that she observed that the baby was not having enough Bosom milk and needed to be fed with milk mixed with other nutrients. According to her, the woman assured her that she had spoken with a Doctor in the children’s ward who promised to get the milk and other baby foods for her.

“I told her that the father had bought the food for them but she said that it was not those ones they needed but something better. She asked me which among the babies is the senior and I showed her Ibrahim. She then stretched her hands and carried him. She told me that she was taking him to the children’s examination room. “I did not know her but I kind of trusted her, I told her to wait for my mother-in-law to come but she just went away with him,” Alhassan narrated.

Chairman of the Medical Advisory Committee of the ATBUTH, Dr Haruna Liman, confirmed that the baby had been found. Speaking while handing over the stolen baby to the mother at the hospital, Liman said that the twin baby was stolen from the mother in the hospital eight days after she gave birth to a set of twins.

“The baby was stolen on 21st September 2022 by 4:30 pm from the mother who is receiving treatment in the hospital. The baby boy was rescued on the 27th of September at around 1:00 am in good health. “We appreciate Allah and the effort put by the Internal security of the hospital, the Department of Security Services (DSS), the Police, and other security agencies in recovering the baby.”

Liman said that security agencies have already arrested the woman suspected for carrying out the dastardly act saying,

“She is with them (the DSS) under interrogation, that is all we know after the security agencies have handed over the baby to the hospital management.

“We are now handing over the two weeks old twin baby boy to the mother and the family in good health.”

The C-MAC assured that the management would review the security architecture of the hospital as well as install more security technology devices in the hospital.

Responding on behalf of the family of the stolen baby, Malam Shitu Kalid expressed his appreciation to the management of ATBTH for their concern and the security agencies for recovering the baby.