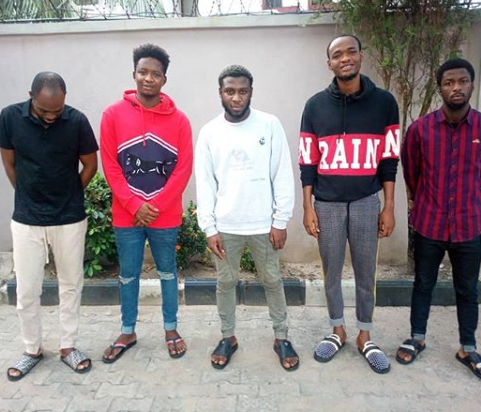 Yahoo Boys Pose For The Cameras After Court Hearing

Via a statement released by the EFCC, the names of the convicts were given as Omengala Emmanuel (a.k.a. Frank Hoffman), Obonga Valentine ( a.k.a Patrick Seaman), Segun Dele Jude (alias Hal Burlington), Promise Nkanga and Omengala Paul (alias Christopher Mason).

The convicts pled guilty to the one-count charge preferred against them separately by the EFCC for their various involvements in cybercrimes.

They have since caused a mini stir online after a photo of them after the conviction surfaced online showing them smiling and posing for the camera.

Adeboye: I Will Build A Church As Big As Ibadan Before I Die Previous post
Dangote, Other Billionaires Attend Davido’s Brother’s Traditional Wedding In Calabar || See Beautiful Pictures Next post