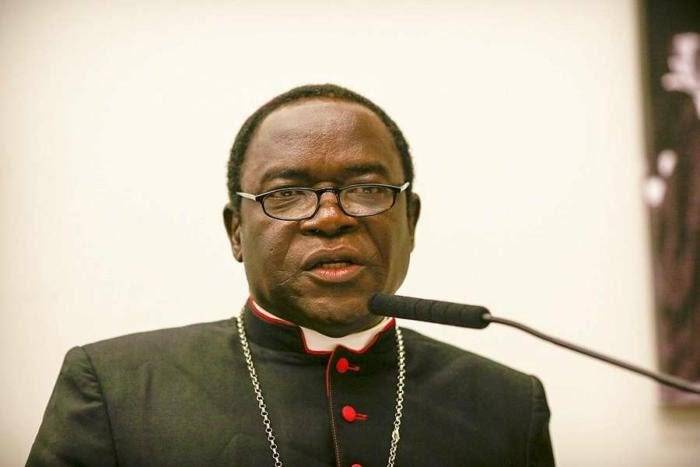 Matthew Kukah, the Catholic Bishop of the Diocese of Sokoto, has criticized President Muhammadu Buhari once more for the unrest, corruption, and insecurity in Nigeria.

Kukah contends that rather than lying and blackmail, restoring Nigeria will require courage, honesty, truth, humility, trust, and firm commitment.

In a Christmas message titled,

“Nigeria: Let Us Turn A New Page”, Kukah claimed that members of the Buhari administration, whom he referred to as the President’s Friday men, enjoyed verbally harassing him for daring to criticize the vices of the government.

The revered cleric claimed that he found comfort in the fact that none of his attackers had been able to refute the core of his assertions.

“I have listened as the President’s Friday men, wearing their laurels won from chasing shadows, have accused me of attacking the President, or not being a patriot. Some even went to the length of accusing me of being against Islam or the north.

“The important thing is that none of my critics has quarreled with my facts. If they accuse me of stating inconvenient facts/truths, then, they can at least give the facts their interpretations.

“For example, who will quarrel with the fact that our glory has departed as a country? Where is our voice respected today even within the African continent which looks up to us for leadership?

“Unless we count lining up behind others for handshakes across Europe and America as achievements, we will be remiss not to worry about our declining global influence. Is being the poverty capital of the world and one of the most violent states in the world an achievement? And our suffocating internal and international debts? And you do not think our glory has departed?

“Clearly, in almost every department and with all indicators, our nation has become a tale of two cities. We have wars between the rich and the poor, men and women, across generations, along party lines, social classes, religion, ethnicity and so on.”

“The centre has given up in almost every department. Fixing our country and getting it back requires courage, honesty, truth, humility, trust and firm commitment. Lies and blackmail are no substitute,” Kukah said.

He added that despite the many lofty promises of Buhari, he is leaving Nigerians “far more vulnerable” than when he assumed office on May 29, 2015.

Kukah said he does not doubt that the health of the President had improved in the last seven-and-a-half years and wished millions of Nigerians enjoyed a fraction of his improved health through access to better healthcare services in the country.

“Mr. President Sir, a merry Christmas to you and your entire family. I speak for myself and Nigerians when I say, we thank God that He mercifully restored you to good health. We know that you are healthier now than you were before. We can see it in the spring in your steps, the thousands of miles you have continued to cover as you travel abroad. May God give you more years of good health.

“However, I also wish that millions of our citizens had a chance to enjoy just a fraction of your own health by a measurable improvement in the quality of health care in our country. It is sad that despite your lofty promises, you are leaving us far more vulnerable than when you came, that the corruption we thought would be fought has become a leviathan and sadly, a consequence of a government marked by nepotism.

“In my Christmas Message last year, I pointed out the fact that you had breached the Constitution by your failure to honour and adhere to the federal character provisions of our Constitution. The evidence is all before us all,” Kukah added.

To Avoid Problems, I’ll Be Far From Abuja Once I Leave Office – Buhari Previous post
I Had No Shoes For First 18 Years Of My Life – Adeboye Next post